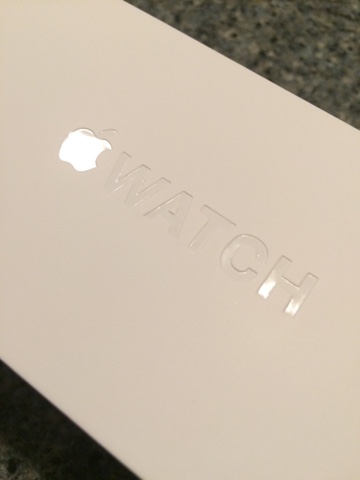 Yeah, I'm sure this comes as a shock, but I am now the proud owner of an Watch. I got mine about two weeks ago, and have been learning about it and integrating it into my life ever since.
Initially, (the first partial day), I was worried that the battery rumors were going to prove true - that the runtime was less than a day. I took the charger in the car with me while I drove to a play with my wife and a friend that evening, and let me tell you, keeping the watch attached to a magnetically attached charger while riding in a car is not my idea of fun. Next day, while helping someone on the phone with their watch, I decided to hard reset mine at the same time. To do this, you hold both the side button and the digital crown until the Apple logo appears. This same process can heal any other misbehaving iOS device by forcing a reboot without saving the preferences as they are, but reloading everything from the storage. Problem solved. I've rarely set it on the charger at the end of the day with less than 30-40% charge still on it, and I'm still in that "new gadget" stage where I'm playing with it all the time.
That said, I'm noticing some things about using this new gizmo. I'm not going to harp on missing features or 1.0 product shortcomings, but there are a few things I've had happen that you're sure to see as you integrate this new tool into your life.
1) Don't be afraid to turn things off and on. Glances and notifications, as well as third party apps for existing iPhone apps may work nicely, and may be a complete bust. Try them out, and keep your eyes peeled for updates. Sometimes, the developer acts quickly to add things as their own use of the watch with their app grows. If you decide not to use the glance, be sure to view the app and see if it has more useful information to offer.
2) Give the developers realistic feedback. They have a tough enough job executing their own ideas. Getting assistance from early adopters in the form of well-thought-out, constructive feedback and ideas can go a long way toward enhancing their vision of how to implement their watch app. The realistic part of the feedback is: Don't expect miracles. Saying something like "Well, if it can't monitor my blood pressure constantly, it's crap!" only makes you look foolish. Know the realistic capabilities of the hardware, and ask gently if these things could be implemented. Just because you paid someone a buck for their app doesn't mean they work directly for you. Same thing if you paid ten bucks.
3) Know how to give useful feedback. The developers I have worked with over the years have taught me this process, but I'm no longer a professional bug reporter, so feel free to add whatever you feel is beneficial to this list in the comments.

* Give your hardware and software configuration. Always do this first, in case it's something that has already been fixed in a newer release or is an otherwise known error.
* State the expected behavior and the unexpected behavior. "It's not working right" is not enough. "When I'm on the Glance screen and tap to launch the app, my watch reboots" is much better, in that it tells the reader where you are, what you did, what you expected and what happened instead.
* If you have an idea or additional information, add that. "I was on a run, and my phone was back at the house, so wasn't near my watch when this happened. Then, when I got back home, it worked as expected."

4) Don't give stars for unpromised features. If the app says "a simple app for displaying text on your watch", don't get riled up and give it one star if you can't show movies, enter text, dictate voice, capture location data, or anything else. The developer promised a way to view text. Does it do that? If yes, then it's working. Does it easily allow you to edit the text on your phone and update quickly? That's great. If you cannot ever change it on your phone without deleting the app and redownloading it - well, that is a bit limited. But it's still within the range of the description.
5) The last thing I'll suggest is that you don't use the watch just because you can. I work at home, so my family is used to me talking to devices, but the other day, I got a text from someone and thought "This is a short reply" and just tapped the reply mic on my watch. I suddenly felt like everyone in the place was staring at me and I was holding a cellphone in a restaurant in 1995. Everyone was looking at me like I was from the future - and had antennae growing out of my forehead or something. No one wants to use tech that makes them look conspicuous, so better to just pull out the phone and tap out a reply, unless you're among those who don't freak out and you can just tell Siri "Things are fine here. Proceed with the invasion as planned."

A few Options
I doubt I'll turn this blog into a full app review site, but I've found a couple of apps that have Watch apps included, which I find especially handy on the wrist. In no particular order, here they are.
Wunderlist
This is a multiplatform app, with an online and group use functionality that is hard to beat. There's a pro version which adds more storage and projects, but for personal and small business use, the free version is hard to beat. On the watch, there is a Glance view for to dos, assigned tasks, and appointments. The app, however, gives you read only access to all your project tasks. Sub tasks can be entered on the phone or computer versions, as well as unchecking to dos, but the watch is read-only, with the exception of being able to check off tasks from any list. I find this great for shopping lists at various places, where I can re-add, say, almonds to the Costco list (via phone, Mac, or iPad). Then, I can check things off on my watch while in the store, without having to juggle my phone while grabbing those massive boxes of wine or bacon.
Boximize
This is a fairly new app for me. For all intents and purposes, it's a flat file database construction kit. You can put any number of fields in just about any format into any list. Then, as you enter records, you have the ability to sort and edit things on your phone. The watch app will only display the current saved version of the lists you have on the phone. There is no glance view for this, but you can see all of the values for each of the fields in each file. Personally, this is where I now store my current list of medications. It's very simple - med, dosage, active or not - and I can rattle them off to any medical person fast enough to scare them. Again, this is read-only. But if you're keeping up with serial numbers, server IP addresses, admin passwords…you get the idea.
Dash
Talk about a one-trick pony. This app will do one thing - allow you to enter one screen of data on your phone, and have it be on your watch. How useful is this? Well, right now, I'm showing a two-piece screen which has the current charge of my phone and a nice picture of me and my Lovley Bride. I'm waiting until my phone has a better charge before going out, but I'm not sitting at the desk where it's charging. So, when I get to a new thought or paragraph, I hit the app on the watch, and see that it's - hey 41%! Started out at 25% just a few minutes ago. So, you have two different things you can send to your watch. The top third of the screen can be your iPhone's charge, or a block of static text. The lower two-thirds can be one of three things: your iPhone's current wifi network, an image, or a larger block of static free form text. And that's it, but it's quite nice, if you tend to forget, say, your garage door code, or your email password, etc.
1Password
We all hate passwords. They are the 21st century equivalent to plowing the south 40 with a slow mule, or beating the rugs out in the backyard, or mucking the stable. This program had enabled me to have passwords easily at hand for hundreds of accounts, with nothing more than - wait for it - one password to remember. And, with TouchID, I only need that one when I restart my iPhone or iPad. With the Watch, there is now the ability to have certain passwords on my wrist as well. The Lovely Bride, as I've stated before, is not a Luddite, but definitely prefers to not use technology if there's a serviceable method available in the analogue realm. But, when she needed a password and all I had to do was pull up this program on my watch, her jaw dropped, and she said, "Now, that would make me want an Watch." I rest my case.
at June 20, 2015

Macslive
Now download the latest updated versions of mac & pc applications. Get the latest games, applications & much more with just one click https://macslive.net

[ed. This piece was written some time ago, but I found it recently while moving hard drives on a computer. I thought some folks may find it ...